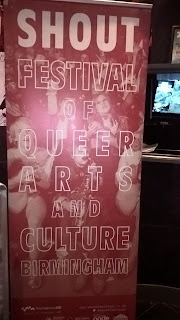 Over the last few weeks there has been a kind of culture binge going on in my life. Part of it came from the Shout Festival which was a 10 day LGBT+ festival in Birmingham. Over it I saw a few things but there were two stand out highlights for me. They were Deep in the Heart of Me, performed by Ali Child and Rosie Wakley of the Behind the Lines Theatre Company and Looking for John written and performed by Tony Timberlake.


The former was a play which on one level is about a middle aged woman coming to terms with an emerging sense of her own sexuality, and doing a bit of a Shirley Valentine (but meeting a woman). However, this beautifully performed piece of musical theatre is far more than this. There is a deep exploration of the feelings around the empty nest going on. Whilst the venue it played in was the back room of a pub, which was a bit too small for the production and the audience was disappointingly sparse there was a strong connection with the audience in this piece. It was a real pleasure to watch.

Both Deep in the Heart of Me and Looking for John made good use of background images to help set the scene and increase the drama. However, that is where the similarities end. Looking for John, which was in The Door (the smallest performance space at Birmingham Rep) was an intense piece of drama which explored the life of John Curry, by focusing on a fan who was seeking to use John’s biography to make sense of his own. Whilst there was laughter there was also real pathos.


Whilst I would highly recommend both my favourite was Deep in the Heart of Me because it was really fun.


Balanced against the performance was comedy has been art. The IKON has an interesting set of installations which are on for another week, until 27th November. The current exhibitions include work from Žilvinas Kempinas who has been playing about with moon images and steel bearings to make some mesmerising pieces.


Sara Barker’s work has some interesting shape and colour and Philippine Hamman’s ergonomic furniture for those who don’t want to get up is fun. 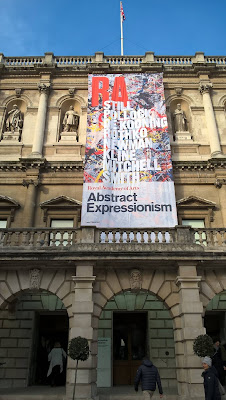 If you get the chance to get to this exhibition I highly recommend it.


Whilst these events have all been in Birmingham I’ve also got down to London and had the chance to enjoy the Royal Academy’s Abstract Expressionism and  Intrigue: James Ensor by Luc Tuymans. Now, I’ll be honest I went because I’m a Friend of the Royal Academy which means I’ve paid for the years exhibitions. It’s a short wander from where Two:23 meet and I find wandering round gallery’s a way I encounter God more than in a lot of churches. Thus, I go and enjoy the art before heading off for formal worship. These days where I spend time reflecting on art before joining friends for worship are a real chance for me to spiritually refuel.


I didn’t expect to enjoy the Abstract Expressionism, however, I was really drawn in and enjoyed it. The Jackson Pollock pieces were the ones which really engaged me through their beauty but I liked a lot of the others too. Now, I’m not for one minute pretending I understood any of the art in this exhibition but the scale and colour within a lot of it really did have something which made you think ok, there is something going on here I don’t understand but I like.


The Ensor exhibition mixed pictures which were quite pretty, especially his early work, with ones which were down right disturbing. There were two contrasting crucifixions in the exhibition. One was darker and more traditional, with the crowd around Christ apparently praying. The other was brighter and the loin cloth almost had the feeling of a tutu. There were faces in this one which could have been the crowd or could have been the beginning of the harrowing of hell and may have been spirits. The latter one both disturbed and challenged me yet it was the more beautiful of the two.


These exhibitions are on into the new year and I would recommend them.
Posted by Sally at 13:16 No comments:

Bringing in the Sheaves by Rev Richard Coles - Reviewed

It took me a couple of chapters to work out that Richard Coles was going through the year in his book Bringing in the Sheaves: What and Chaff from My Years as a Priest. To be honest I have to admit part of the reason it took the first three chapters was he starts with Petertide rather than advent or January. As with a lot of things in this book there is reason for this and explanation given. The structure of the book is this version of the liturgical year – with hatching, matching and dispatching, thrown in there too. 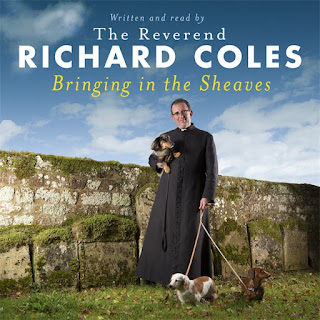 It also took me a few chapters to get a hang of what type of book this was. The style of writing is quite different to his first volume of his autobiography Fathomless Riches or How I Went from Pop to Pulpit (which I reviewed here). Where as that is based around anecdote and self-reflection with a bit of education mixed in this is a much more focused book. It has the clear purpose of raising religious literacy amongst its readers whilst giving the stories and titbits of gossip which keep it interesting for those whose tastes might generally be a bit more low brow.


Besides an unpacking of the meaning of different parts of the church year and the anecdotes there is also a rich seam of history running through this book. Coles looks at the lives of a range of saints too and demonstrates his pure passion for as well as in-depth knowledge for church history.


Having read the first books reflections on his time at Mirfield I was surprised that it got mentioned so often in this volume, as somewhere he had chosen to revisit.


He is still the wonderful camp guy making the point that he is determined to be open about his sexuality, yet he is also the happily “married” (legally civil partnered) guy who shares his life with the man he loves and their dogs.


The broadcasting career is in there but more interesting are his anecdotes relating to “ordinary” folk he comes across in the course of his ministry which has been to the very rich, the very poor and the standardly middle class.


So is it worth the read? Definitely but be prepared that this is much more Guardian Review than the Saturday Guardian Guide in style.


It is touching in places, particularly when he talks of his dad’s Parkinson’s, hilarious in others and overall enlightening. You learn lots without feeling that you are being hit over the head with it.


The overall feeling of this book is it is the one which Coles wanted to write. The one which enables him to write a theology book for the masses. Thus the biggest feeling I came away with was this guy has integrity. He’s not playing games, he’s writing the book he wants to. He is not worried it’s probably too faith based for some people outside the church and too honest for some in it. That’s what makes it so good, in my opinion – it’s an honest book written by a clever bloke who got famous through low culture but really has a heart for high culture.