Mission on the Road to Emmaus - A Review

Mission on the Road to Emmaus: Constants, Context and Prophetic Dialogue edited by Cathy Ross and Stephen B. Bevans is a contextual theology book focusing on the theme of prophetic dialogue. It contains essays by fifteen eminent theologians primarily but not exclusively based in the USA and UK; many of the US contributors are academics at Catholic Theological Union in Chicago. However, unlike many texts of this type it consciously seeks not to be overly ethnocentric in its approach. It was pleasing to see Baptist minister and theologian Joe Kapolyo amongst the contributors - he was recently identified by the Baptist Times as one of the emerging African theologians inBritain.


The book is co-edited by Cathy Ross who teaches with a range of institutions around Oxford including Ripon College, Cuddesdon and on the CMS Pioneer course who was also one of the editors of The Pioneer Gift: Explorations in Mission, which I have also reviewed. It contains an essay from Jonny Baker, Mission Education Director of CMS, who was her co-editor on that project. 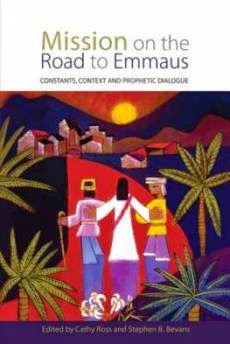 If at this point one starts to see a web of connection amongst the authors it is no coincidence. In the introduction to this book Bevans and Ross conclude "All these writers are our friends...."


Whilst there may be differences between them in approach and theology there are some strands which run throughout the book including a strong focus on the trinity and the relational nature of God and man. There is also the strong passion for mission each writer clearly has together with the influence of liberation theology on most of them in some form or another. There is also a feeling that much of the book is in some way a response to an earlier work Constants in Context: A Theology of Mission for Today (2004) by Roger Schroeder and Stephen Bevans. Indeed the final chapters of this text by firstly Schroeder and then Bevans appear to confirm this. Perhaps the present book might have been subtitled a reflection on contextual theology ten years on.


The book flows from what one might describe as the more academic and somewhat traditional academic style in the early chapters which focus on Christology, Ecclesiology and  Eschatology to the more narrative and conversational approach in the second half of the book which deals with Soteriology, Anthropology and Culture.


Whilst the book seeks to be accessible to those with differing levels of theological training and understanding the opening chapters are certainly helped by having some background knowledge of some of the key figures and debates in applied, practical or contextual theology over recent decades. That said a lack of familiarity with these should not be a barrier. Breaking all the rules of what is considered good practice I found myself using Wiki on more than one occasion to help me with my understanding of words/ concepts I was not already familiar with and quickly picking up what was being said. I would assume one might also do this with some of the theologians mentioned if one was not familiar.


The first chapter Prophetic Christology in the New Testament by vanThanh Nguyen, one of the Union based contributors, provides an insightful discussion based around Luke 4: 16-21 primarily. It establishes a specific portrait of Christ as one on a prophetic mission.


Continuing looking at Christ Amos Young, a US based academic from Fuller, provides us with Christological Constants in Shifting Contexts: Jesus Christ, and Prophetic Dialogue and the Missio Spiritus in a Pluralistic World. The central thrust of this chapter appears to be that if we look at Jesus as the relational prophet we move away from classical exclusivist understandings to ones which are more able to facilitate meaningful interfaith dialogue.


The final chapter in this section comes from Kirsteen Kim. Within it this professor from Leeds Trinity focuses upon Jesus, Mission and the Holy Spirit in Luke-Acts: Dialogue, Prophecy and Life. It is a chapter which focuses on Christ as both giver and receiver of the spirit and challenges the reader to engage with both Christ and Spirit.


As we move on we reach one of the most interesting and significant chapters in the book, in my opinion. Emma Wild-Wood who has taught in Uganda and the Congo before returning to Cambridge writes about Mission, Ecclesiology and Migration. Within this chapter she unpacks a range of issues facing churches and denominations regarding the challenges raised by migration and the relations between congregations and within them. She looks both at single or similar culture congregations and multicultural congregations as well as exploring resident-alien spirituality, ecclesial practice and mission. I would argue this chapter would make good discussion material for any group seeking to engage seriously with the implications of migration in their area.


Cathy Ross follows this with Hospitality: The Church as 'A Mother with an Open Heart'. It grapples with what is church and argues hospitality is at the centre of the household of God. This could come across as somewhat sentimental in tone but doesn't rather Ross identifies the difficulties and risks involved with taking this approach. In wrestling with these things Ross avoids promoting what De Beauvoir described in The Second Sex as a false gender consciousness, which I feared from the title she might.


Dawn Nothwehr, another Chicago academic, takes up eco theology with The Church's Mission of Ecojustice: A Prophetic Dialogue Approach. Whilst in some ways as polemic as Michael Northcott's work in this area it seemed less angry and frustrated, more patiently screaming out an important message for the church to hear.


There was a poetic start to his chapter as Tim Naish quoted Thomas Hardy as he began to discuss 'Continents of moil and misery': Mission, Justice and Prophetic Dialogue. This Cuddesdon based theorist explored the theme of justice by refering to a range of theorists. In particular he contrasts the differing approaches of Sagovsky and Hauerwas when looking at this from a theological perspective. One particularly interesting aspect of this chapter is Naish's brief discussion of his role as an assistant chaplain at a Immigration Removal Centre and of the challenges this poses in the discussion of justice and how to deal with different situations in the real world.


Moving into the forth section of the book we have Robert Schreiter's Reconciliation and Prophetic Dialogue. This was another particularly strong and challenging chapter from another of those based in Chicago. The nature of reconciliation and healing as part of that process is discussed in a way which shows a deep knowledge and understanding of those processes and much wisdom on the subject.


S. Mark Heim is a professor at the Newton Centre in the US and his chapter on Wounded Communion: Prophetic Dialogue and Salvation in Trinitarian Perspective focuses on exactly what the chapter would suggest. This is one of the more abstract chapters which I believe would benefit from further exploration.


As the book moves on to exploring Anthropology: Mission as What it Means to be Human Frances S. Adeney from the Louisville Presbyterian Theological Seminary gives a chapter which comes from a feminist/ womanist perspective. Within it Adeney looks from three different perspectives at the changes in women's mission theology since World War Two. It is an interesting chapter which whilst in many ways a summary arguing for a greater listening to the prophetic voices coming from women in this area also provides a solid foundation for anybody wanting to explore the recent history of women and mission more.


Maria Cimperman's An Anthology of Prophetic Dialogue: Rooted in Hope is a chapter which focuses on the need for us to hold on to hope in a world which would so often move away from it. This chapter from another of the Chicago stable reflects on a number of recent events and has a very contemporary feel to it.


Joe Kapolyo's chapter is an important one which needs to be heard. Within Prophetic Dialogue and the Human Condition he reflects on deep and surface culture and the need to understand what deep culture means in the African context. Through using his own African cultural background as an example this North London Baptist Minister shows how understanding of the holistic nature of this deep culture means that our understanding of African congregations may need to alter from what it may currently be. He makes the point that as these groups are the fastest growing and the baton of leadership is passing to them that, "The quality of that leadership, upon which the very outlook of the Church will hang, depends on the quality of the prophetic dialogue between the word of God and the deep cultures of the African people groups."


Jonny Baker begins the final section of the book talking about Prophetic Dialogue in Contemporary Culture. This chapter explores developing a cross cultural understanding for mission which does not just relate to ethnic cultures but can also relate to understanding different cultures within the same culture. He makes reference to the differences between high and low cultures and the way in which listening is required to understand alternative cultures. Within this he makes reference to the way in which art is often an important tool in this type of prophetic dialogue.


Then we get to Roger Schroeder and his focus on culture as one of the aspects from Constants in Context within the chapter Prophetic Dialogue and Interculturality. The  Chicago based professor explores aspects of the social sciences and missiology to argue for a transformative approach to prophetic dialogue and interculturality.


Finally Stephen Bevans, also of Chicago, brings it together with what might be described as a defence of contextual theology as an academic and theological approach.


Is it a book worth reading? I would say definitely, although at over £30 the cost may be to be prohibitive to many. I had to consider this very carefully, even with a marketing discount from Eden to put towards the cost. Yet I think it is worth it. It is a book which should be more widely read than just by theology students dipping into chapters for seminars or essays.


Divided into the six portions I am going to explore it in more detail over Lent.